Tired of the narrative reading about what you have just missed out on in the apiary? 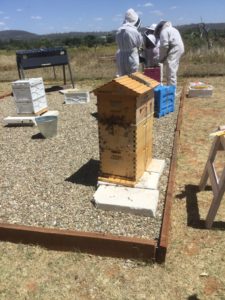 Sharing skills – Cormac dropping a new queens into a sentinel colony on the 14th of Februarythe club newsletter comes out.  So if you’d like to know more about how to approach a task such as requeening or disease inspection, we hope dialling into Bee Buzz Box will help.  And hey come out to the apiary to hone or share your hive skills.  Find out when by checking out regular club website posts.

Yellow is the colour of my true-love’s hair

One of the distinguishing features of a well-managed apiary is its requeening program.  The club requeens its honey bee colonies regularly to ensure that they remain gentle, healthy and productive.  And to help us do that we’ve adopted not only a requeening code of practice – you’ll find that under POLICIES on the club website – but also the international code for marking honey bee queens.  Most queens in our apiary are marked yellow (requeened in the 2017-2018 season just passed), but then there are always a few colonies with oldies to keep a very close eye on.  So when we come across a dot that tells us that a queen has passed her use by date we swing into action and requeen.  That’s why we try to keep spare queens in nucs as spares.

Colour coding was developed for the temperate northern hemisphere cycle where the mid year bee season is bookmarked by colder months.  Not a problem if you want to use this system in southern or tropical climes.  Yellow was the go in our spring of 2017, so all queens got that coding for the season going into autumn 2018.  Next spring any newbies will be marked red using that distinctive bald spot on the thorax, a practice that might be more universally adopted, well at least to reduce the prevalence of ageing male apiarists.

The great advantage of marking queens is that you can estimate age without digging into your (in our case HiveKeeper) well kept records.  While the occasional absence of a dot may mean that the colour patch has been groomed off, in practice the bright spot almost always makes the task of finding that old queen just so much easier.  No spot means that a colony has swarmed – likely months ago in spring – or more likely that the colony has simply replaced its old queen.  The old girl has been superseded.  At present that’s the rule as much as the exception.

Supersedure this season and around now

Many beekeepers are blissfully unaware of this process of succession.  Sustained laying – to keep up a workforce to gather near record crops this past summer – means that many colonies are now not doing as well as they might.  They may have tell-tale spotty brood or may be more aggressive than they were when you last checked.

Very often you’ll find an old and new replacement daughter queen laying side by side.  So when you find that old queen take the trouble to inspect other brood combs to make quite certain that a second queen is not present.  Well it never hurts to look and it may save you the loss of the newbie you’ve just forked out for.

In our close watch on club bees, we have observed supersedure fifteen or more times (over the last two seasons) and sometimes come across two queens.  Put simply colonies regularly raise a new queen to ensure their survival and usually no more bother trying to keep their old queen ticking over than they do to rescue worn out worker bees.

Like swarming, supersedure is something you can exercise a good deal of control over.  Trouble is that, in an unmanaged backyard apiary, any feral replacement queen is unlikely to do as well as that queen you should have already replaced.  And ouch, a crook self-replacement queen can mean your bees tend to be of the stingy type.

I think that autumn queen replacement is terrific.  In practice it means that:

Replacing a queen whenever a colony is showing signs of stress, notably disease or has little brood and few bees is a good idea provided the colony is AFB free.  Of course at this time of year colonies down-regulate bees numbers to conserve resources over winter: a failing queen is another matter.  Owning colonies that are obvious losers does sound a bit silly doesn’t it?

Autumn requeening has other hidden advantages.  Firstly a new queen will, like any other queen, lay minimally over winter, so she won’t age significantly.  The queen you introduce now will be much like any queen introduced in spring but with a singular advantage.  Short of the colony starving, she will be there when she is most needed.  Further having an overwintered young queen heading a colony will not only help avert early swarming but also reduce the risk of your ending up with a drone layer.

There are two types of drone laying colonies.  Both are doomed.  They are either headed by queens that have run low on sperm stores or are run by laying workers that have taken over from an old queen that has died and not been successfully replaced.

Having well provisioned colonies going into winter and headed by young queens also means that colonies will be ready to replace long-lived (so called diutinus) worker bees that die in late winter and early spring.

There is one other part to this requeening equation.  Most reputable queen breeders now raise queens that have hygienic offspring, bees that clean up chalk and sac brood and that cart out dead and Nosema laden bees.  Bees lost to disease have a multiplier effect on colony well being: fewer bees means less honey and less pollination.

The net result is that autumn requeened colonies will be ready to take full advantage of any early honey flow.  Maybe that’s a reason why some beekeepers got a whole heap more honey than others over this amazing past summer.  They simply had healthy colonies with young queens and large numbers of young bees.  My guess is that is why those bees hooked into that early (October) Red Box honey flow and why bees remained strong right through exceptional summer flowering.

Any lessons learnt?  We certainly hope so.  Anyway we are currently replacing the old girls in our club apiary.  And if you want to know more about the natural annual cycle of spring bee buildup and late season decline pull up an armchair in front of that upcoming open fire.  Then, equipped with a glass of red, read all about it in Randy Oliver’s great multipart exposé starting at http://scientificbeekeeping.com/understanding-colony-buildup-and-decline-part-1/