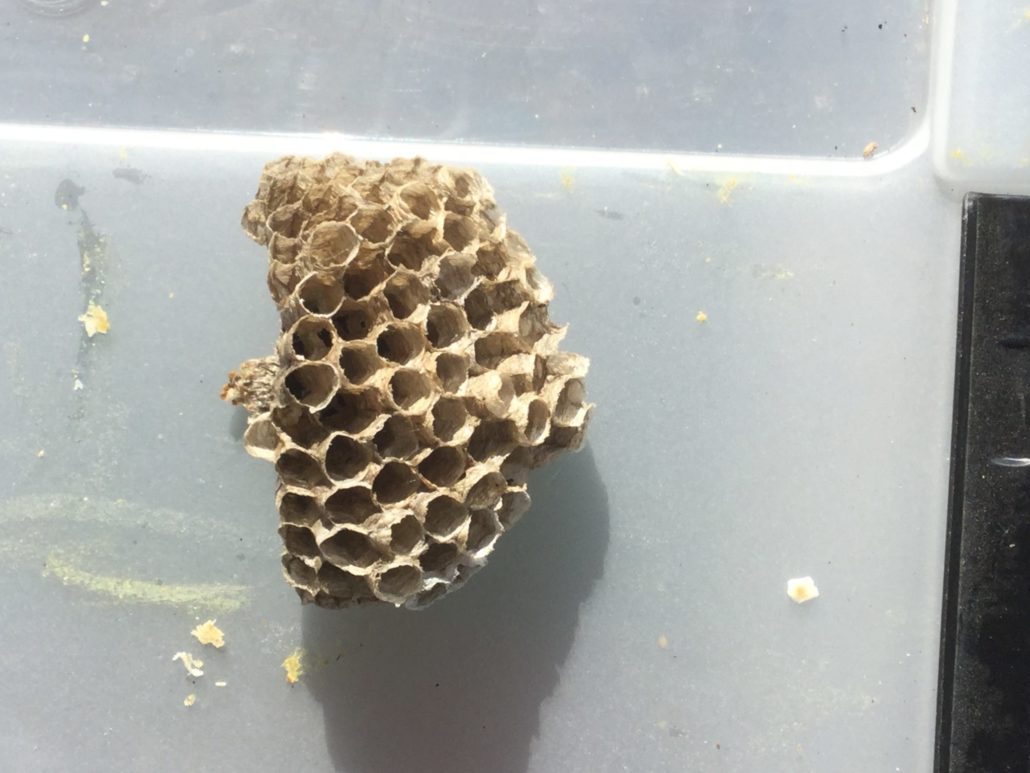 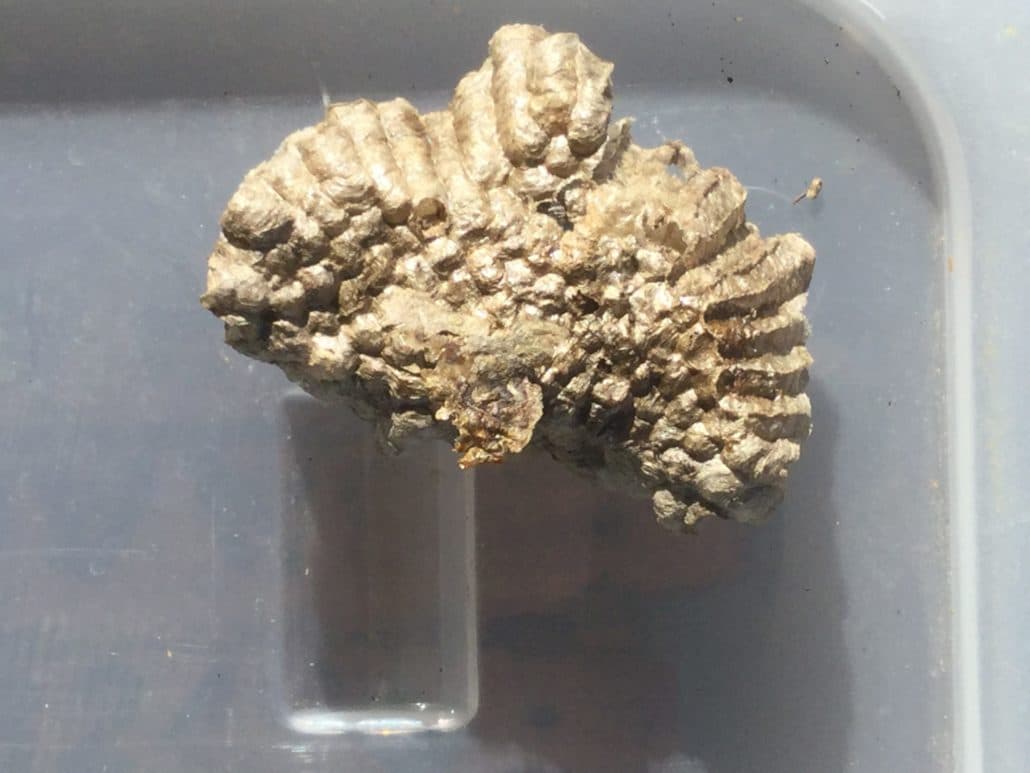 Polistes chinesis 47 cell nest (above and below) from Jerrabomberra Wetlands 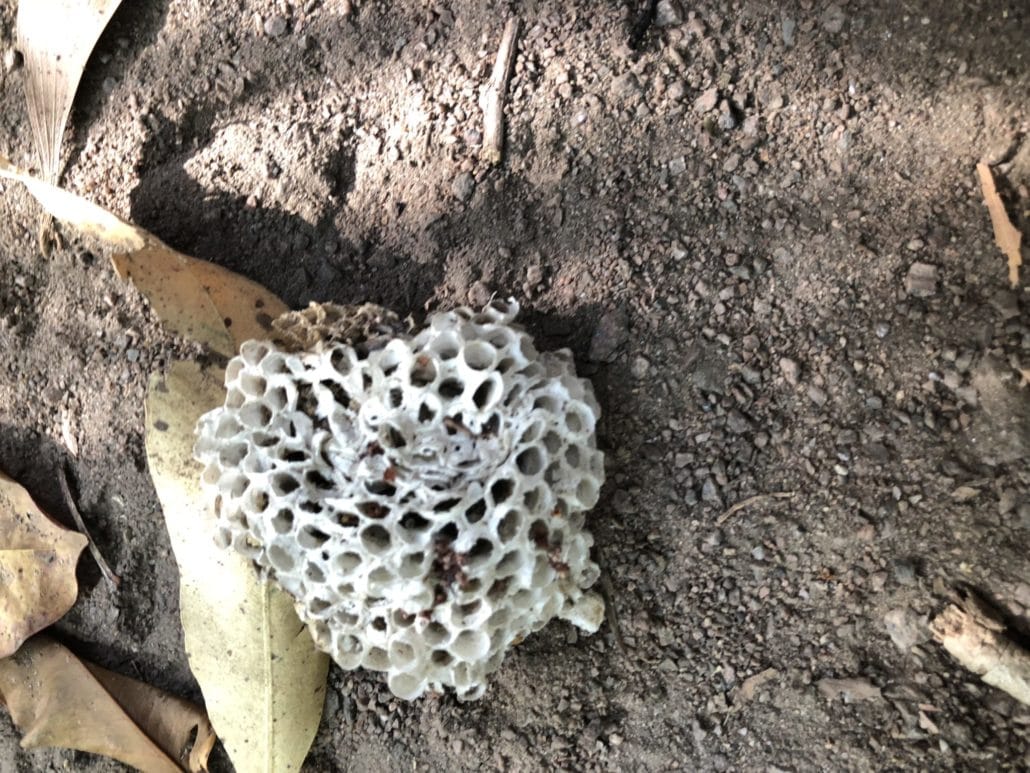 In Part I, we briefly examined the origins of advanced eusocial behaviour amongst ants, bees and wasps. We can now explore this diverse group of social insects, discovering how they are related to one another and familiarising ourselves with common social taxa.

How can we categorise the roughly 13000 social ants, wasps and bees? Firstly let us examine their relationship or phylogeny, that is where they came from in time and space. The diagram shows the overall relationships of social members of this large insect group. There are many other families that contain only solitary and parasitic species of which none are social. For those you will need to resort to specialist texts such as CSIRO’s Insects of Australia.

The Hymenoptera are divided into two broad suborders, the Apocrita containing all the ants, bees and wasps and the Symphyta containing the phytophagous (plant eating) sawflies. While gregarious as larvae, the sawflies contain no social species and are a small and poorly diversified group of solitary insects. 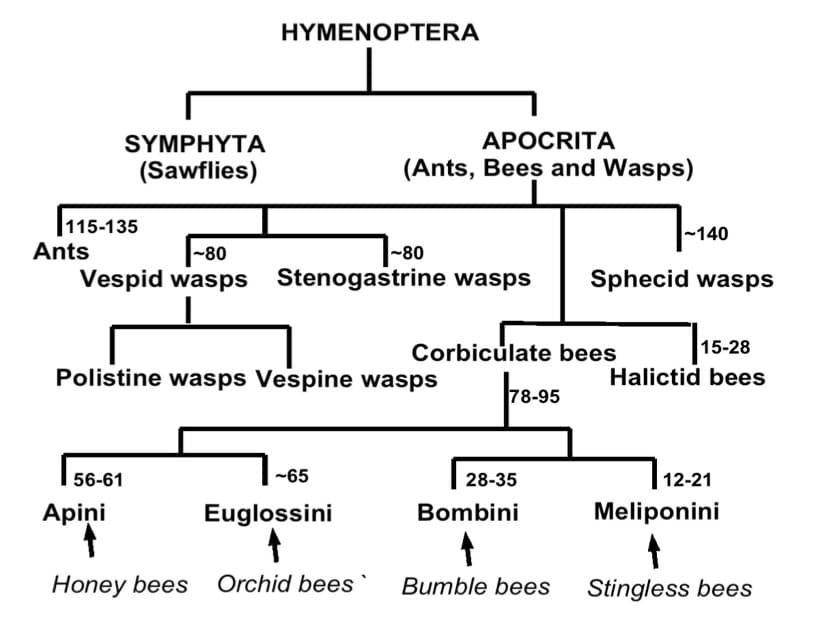 Ants are the dominant land invertebrate. And they are more than just the nuisance to be contended with in your honey pot or sugar bowl. Think of the ubiquitous Green Tree Ant (Oecophylla smaragdina) of the Australian and Asian monsoonal and wet tropics, or of the South American Red Fire Ant (Solenopsis invicta) from the Pantanal region of the Paraguay River and introduced to Alabama in the 1930s and to Brisbane in 2001. These are the quintessential barbeque stoppers.

I wake in the morning as soon as ‘tis light,

And go to the nosebag to see it’s all right’

That the ants on the sugar no mortgage have got,

The Billy of Tea Anon 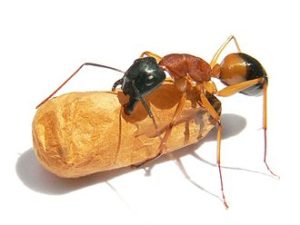 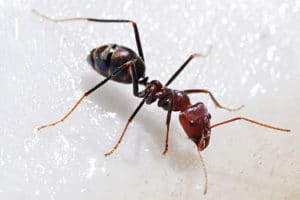 The Sugar Ant taps aphids, harbours larvae of the iridescent tree-topping Azure Purple Butterfly (Ogyris genoveva) in their nests and predate on the Meat Ant. Meanwhile the also omnivorous Meat Ant protects and taps the larvae of the brilliant Imperial Hairstreak Butterfly, Jalmenus evwagoras. The giveaway for this spectacular butterfly is a largely defoliated black wattle such as Acacia mearnsii. I’ve often seen adult butterflies, their pupae and their larvae attended by these ants. 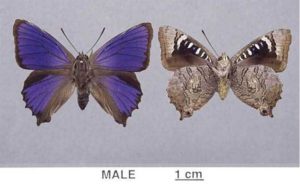 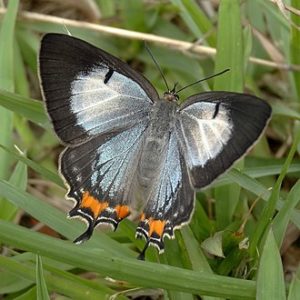 I was once party to a published article on the Meat Ant. We were at Kinchega National Park studying the trophic space – where these scavenging ants fitted into the food web – of that arid landscape. Our ants were bringing home a veritable smorgasbord of delectables. Meat ants scavenge like teenagers, and what they eat was as easy to collect and recognisable as the wrappers from from muesli bars and icecream combs. And like adolescents, meat ants are not picky eaters. We found that they harvested the remains of nearly a dozen insect orders including plenty of live termites. Never admit to owning dying livestock or suffer the misfortune of becoming a lost shearer out there.

We were happily collecting these tasty tit-bits, that was until a thunderstorm rolled in an hour before dusk. Like bees facing a sudden change of weather, our ants stopped partying and headed home. However, it was soon apparent that some ants were heading away from, and not towards, the safety of their red-sand nest. Where were these ‘lost souls’ off to? A small amount of bush tracking showed they returning to a small nest over a dune and about 50 m away.

We had first hand evidence that the parent colony had budded off a daughter nest, swarm-like, and were gradually establishing a new colony. This is but one way that social social insects start again. Newly mated winged-queens of the Sugar Ant, on the other hand, fly away in droves conferring the advantage of being able to establish new nests far distant from the parent nest.

Social members of the complex assemblage of wasps comprise the bee-like sphecid (thread-waisted) wasps, the Vespidae separated into the stenogastrine (hover) wasps and the vespid wasps. The vespids are further divided into the polestine (paper) and vespine (mud dauber) wasps. The sphecid, stenogastrine and vespid-like wasps each have an independently evolved social ancestor as we saw last month in Part I. Common exemplars of the vespine and polestine group are the exotic ground nesting European Wasp (Vespula germanica) and the overhang nesting Chinese Paper Wasp (Polistes chinensis), both serious honey bee competitors. The local native relative Polistes humilis has been largely displaced by the Chinese Paper Wasp.

If you are interested in keeping native bees and wasps, you can’t do better than to join Peter Abbott’s special interest group but don’t expect a sweetened reward – local species are solitary, not social. You can also join our honey bee pest sentinel program on the lookout for invasive Asian Honey Bees – a very close relative of the Western Honey Bee and the predatory and destructive Asian Hornet, Vespa velutina, a vespine wasp predator that we, as beekeepers, want to avoid ever encountering.

Although many wasps and ants are collectors of nectar, honeydew and pollen, bees have abandoned their mainly predator cousins and adapted to collecting nectar and pollen alone. By way of example, sphecid wasps, closely related to the corbiculate bees provision their larvae with prey but as adults are nectar and pollen collectors. Of the halictid (sweat) bees that are social, all are at best primitively eusocial. Perhaps the most spectacular Australian halictid species is the solitary blue-banded bee, Amegilla pulchra. They have no social representatives in Australia. 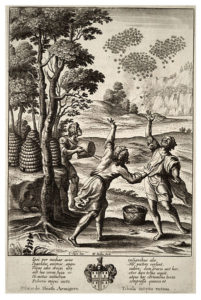 The corbiculate (pollen basket) bees contain all of the most advanced eusocial species. They have an ancient lineage with a single progenitor dating back about 90 million years. From this social grouping came the modern tribes, the primitively eusocial bumble bees, the highly developed and very successful stingless bees (Australian aborigines call them sugar-bags) and the most socially advanced of all, the honey bees. The remaining orchard (long-tongued or buzz pollinator) bees are nearly all solitary and are at best weakly social.

One distinguishing feature of the tribes of corbiculate bees is the variation in their reproductive strategies. The bumble bees produce queens and males over summer while the fertilised queen aestivates over winter and establishes new colonies each year. Both the stingless and honey bees reproduce by swarming and both have a single queen, giving new colonies a jump start. However stingless bees continue to provision the new nest – as we saw with meat ants – giving some surety to establishment of the new colony but curtailing the survival and development of the parent colony. Unlike the stingless bees, honey bees exhibit a special reproductive trick. The swarms, once separated from the parent colony, are entirely independent. This has conferred a special advantage, rapid geographic dispersal of honey bees that has made it possible for them, resource constraints allowed for, to easily colonise whole continents. An extreme example is that of the giant honey bee Apis dorsata (and some African Apis mellifera races) that form absconding swarms. They can migrate hundreds of kilometres either bivouacking or forming temporary nests in their seasonal search for floral resources.

Of the roughly forty genera of essentially tropical stingless bees distributed globally, Australia has only two, Tetragonula and Austroplebeia. These are our only native social bees. The stingless bees are most richly represented in Central and South America.

The honey bees all belong to the monotypic genus, Apis, of which there are eight – likely a few more – species. They have radiated over aeons from islands in the South South China Sea into Asia, Africa, the Middle East and southern Europe and Russia. Their highest biodiversity is in the region bounded by the Phillipines, Kalimantan, Java, Sumatra and the Malay Peninsula. None exist naturally in the New World (The Americas, Australia and New Zealand).