Robert Banker an apiarist to emulate

In the mid 1970’s, Robert Banker, a major collaborator in the revision of the standard text The Hive and the Honey Bee, vice-president of Apimondia and the secretary and past president of the American Beekeeping Federation, published his experiences of running bees in a giant apiary operation.

In his spare time, he ran 1500-1600 two-queen hives and an additional 500 splits or package colonies. In his notes, he speaks of making dead-of-winter (northern January-December) preparations to build strong double brood colonies for dividing them into two single-queen colonies by mid spring. This would leave the bees 6-7 week to build when they would then be ready to unite as super strong colonies headed by two queens coming into the honey flow. A busy man busy with bees!

Lesson learnt? Give away those plans for that tropical holiday. Forget the waving cocoanut palms and get down to the shed to scrape boxes and wire up frames.

My plans are to prepare now and then to abandon our bees, a mere 30 hives I run with my pal and better beekeeper Ian Wallis. That will leave the club bees to the mercy of the Apiary Management Team, Frank Derwent, Jill Robilliard, Michael McMahon and Cormac Farrell and to a loyal team of Heavy Lifters. Going to the Top End and heading down the track and plans to bask on sunny Californian Beaches proved too mach an offer to resist. Apart from any nifty efforts to get bees on track in the first weeks of spring, managing both club and my bees will be left in very capable hands.

Other plans! Well we all hope neither mice nor unauthorised men get into our cosy bee hives this winter. One good trick is to narrow your hive entrances so that bees can only pass each other one at a time. Now is not too late and your effort will be rewarded in allowing your bees to fend off predators, pests such as robber bees and European Wasps and also, hopefully, keep out mice. Purchase Clark Rubber foam offcuts, cut them into strips and poke them into hive entrances with a clean hive tool.

But the bigger plan is to think about how you want to operate your bees next spring. For starters, order queens now rather than waiting till spring when breeder orders will be full. Clean up those frames and boxes, make sure stored frames are wax moth free and build new frames. This will prepare you to put on supers and to respond to the phone call to hive a swarm.

One of the more absorbing things I’ve done in recent times has been to read up on how to kick start swarms and new hives. Apart from adding brood and feeding the fledgling colonies, old tricks, there is one much neglected secret to pushing swarms and nucleus colonies along.

The technique centres around a plan Victor Croker and David Leemhuis outlined when they gave their marvellous talk to the bee club May meeting. Their plan had its genesis in George Demaree’s swarm control plan of the late 19th Century, in Alexander’s ingenious 1910 queen introduction plan and in Farrar’s ‘bee-box-shattering’ efforts to establish two queens in hive back in the 1930s and 40s.

Strong colonies are needed for the honey flow by late October and ‘yes you can do it’ starting with any weak colony and with minimal effort.

Most beekeepers realise that the top super of a hive is a sweet spot – so to speak – to store honey and for that honey to insulate the colony engine, the brood nest, below. Its also a warm spot.

Start with any small healthy colony that has a young queen. Take that colony, a recently established swarm, a hive split or a nuc made up to accept a new queen, perch it above an excluder at the top of a strong healthy hive and walk away. A riser rim with an entrance on one side needs to be placed above the excluder to allow the top unit bee flight. And of course you will need that sheet of newspaper to unite the colonies, that is to give the bees time to sniff out each other out.

The old queen below will keep building the main hive uninterrupted while the top unit with a new queen – you can take it away any time and add a new bottom board and lid – will benefit from stores below and from the rising warmth. It will rocket away like Kim Jong-un. 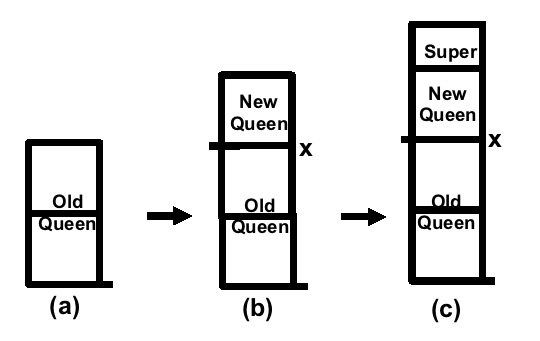 If you are short on excluders, use a solid split (division) board or better a bee-proof double screen. Several words of caution are needed:

The whole caboodle is also a good plan for requeening a hive or for establishing new hives.

Also give some very serious thought to how you will manage the build up of your bees and how to prevent swarming. In the August and September newsletters, Bee Buzz Box will feature simple plans to stop your – and club – bees buzzing off.