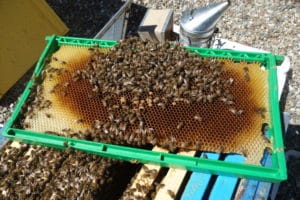 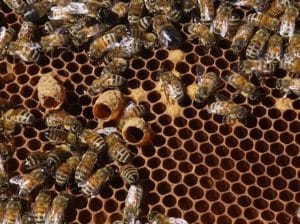 To requeen or not

In my long experience of running honey bee colonies, I’ve finally twigged to the fact that that replacing any crook queen and anyway doing so often is one of the magic secrets of keeping healthy productive bees. But this is a topic of eternal debate in the beekeeping community.

Should you requeen your bees?

Many ‘natural beekeeping’ advocates are firmly opposed to any ‘artificial’ requeening. When faced with the need to replace a queen in a colony that is clearly failing they will only employ queens of ‘local provenance’.  Perhaps the singular merit of this approach is that bees that may have adapted to prevailing conditions are best suited to survive in the local environment.  These arguments have been extended to not feeding bees and expecting bees to fend off disease by themselves, arguments that would get you into hot water were they applied to other livestock or pets.

Honey bees, like cows and most pets, are not native animals. As such it does not seem to be a good idea to use any old queen – say one from a hollow log or a swarm – and expect your bees to do really well.  Most people keep bees to collect honey or to pollinate crops or their veggies.   So having bees, apart from keeping them out of sheer interest, suggests that owning quiet productive bees in A1+ order and getting the best out of them is a smart way to operate.  That’s where regular requeening with good stock comes in.

Modern bees, like all other domestic stock, have been bred to be productive, to be hygienic (disease resistant) and to be very tractable. Good queens are attractive to beekeepers wanting to be able to work their bees hassle free and to have them thrive.

Contrast that with the backyard bee owner hopeful of a few jars of honey but terrified of opening a hive or devastated by the prospect of wipeout by disease and unwilling or unable to check the brood nest. Those are bee owners

What we do in the club apiary

Well the club tries to requeen any hive whenever the brood looks wonky and anyway after at most 18 months.  Commercial apiarists moving their bees from one flowering district to the next and producing in excess of 150 kg of honey per hive per year may requeen their colonies as often as every three months. Requeening is predicated purely on how hard the bees including the queen have worked. 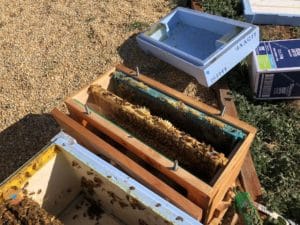 After last year’s bumper crop we expect many Jerrabomberra Wetlands queens have already reached the end of their working life. Most will have run out of sperm stored in a special sac called the spermotheca by spring and will start laying drones only or will be superseded (replaced by a daughter queen). Without wholesale requeening we may end up with many colonies failing as the new season opens in spring.  Indeed we used up all the queens we were hoping to save in nucs and ended up replacing queens that were already on their way out in early autumn.  We left one colony, a Kenyan Top Bar colony J14 with ‘spotty brood’ and headed by a queen from Bruce TAFE days and a regular Langstroth, J02C, to see how queens well past their use by date would fare over winter. Check out the club requeening policy [BAACTI Requeening Policy 16102017] as a guide to when to requeen your hives.

The club keeps good records and conducts frequent brood checks and, in practice and as already signalled, replaces queens older than 18 months of age.  By running nucs (baby colonies) with spare queens our strategy is to provide contingency for replacing poor queens whenever they are needed.  That way we can also swap out old queens that are still performing well to nucs and use them and their brood to support regular colonies.

This swapping queens  comes with a proviso: we check for tell-tale disease before we use those nucs and before we conduct any direct requeening, a simple extension of our apiary barrier system [reference] to confine diseases such as chalkbrood rather than spreading the problem around the apiary.

Sound easy?  I’m often reminded of the old adage: ‘When all is said and done, more is said than done’. Running healthy productive colonies, keeping an eye on brood condition and controlling swarming built round regular requeening may sound like a reasonable proposition but is really challenging in practice.  That’s why we want smart club members in the apiary to watch and to listen to what the bees are telling us they need.