In Part I of this series we explored the notion of a single-queen colony and the rules – set by the bees – for introducing queen bees.  We came to the remarkable conclusion that the same conditions exist for introducing just one or many queens.  If the conditions are just right, a honey bee colony will accept one, two or more new queens.

Part 2 covered the ways in which to simply requeen a colony or to go further and introduce a second queen, a rather more nuanced  style of queening a bee hive. The latter, two queens working together, sets up your bees so they will roar.

In this final part, we will explore how a two-queen colony is run without the obvious need to tell you how to super for a honey flow.  That is another topic for another time.

The potential to operate extremely large honey bee colonies is a far cry from the condition of bees in the wild hive (see Seeley and Seeley and Morse) where the honey bee imperative is less to store honey, well just enough to make it through winter in a natural log hive, and more to survive and swarm prolifically. With breeder selection of queens with high laying capacity, disease resilience and low swarming propensity, the intensely managed colony size increased enormously. With these developments came the realisation that hive space needed to be optimised, that is enough space must be provided for queens to lay and not induce swarming and for the bees to store a much larger crop. The two-queen setup amplifies these space requirements and complicates hive operation.

Because two-queen colonies can easily top 80,000 bees, they are corresponding more difficult to operate and manage than even the most productive single-queen colony.  In the two-queen operating environment, brood boxes are more difficult to access and honey supers may fill exceptionally quickly.  Providing adequate space for queens to lay in at the outset and quick removal of the honey crop is inimical to realisation of their their full productive, as opposed to reproductive, potential.

Running two-queen colonies (Figure 1) arose out of a very different brood arrangement to that of the sophisticated consolidated brood nest hive (CBN) (a). In the original Farrar model (b), and in subsequent improved models promulgated by the likes of Banker, brood nests were established top and bottom with honey supers sandwiched between. These colonies proved to be extremely challenging to operate. 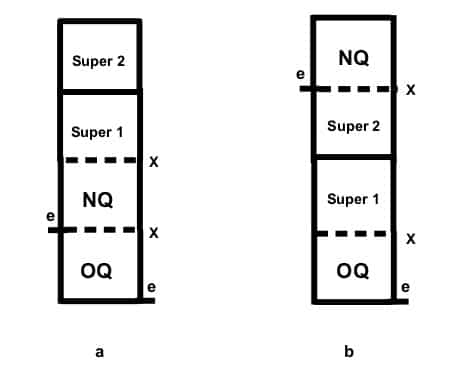 As we shall see, the CBN system almost exactly mirrors conventional single-queen operation facilitating ready supering and harvesting, though the imperative to remove honey more regularly cannot be overstated.  Use of an excluder above the top brood chamber is optional. In an eight-frame operation, employing a shallow (or an ideal super) above the lower brood box will provide ample room for the lower queen to lay, partly obviating the need for regular inspection of and removal of brood from the lower chamber during honey flows.  Using a queen excluder above the upper brood chamber is optional but is useful for the usual reasons for separating the brood engine from honey storage.  Multiple entrances including a separate entrance to honey supers obviates the need for all field bees to traverse the very large brood nest.

The original Farrer style two-queen hive developed in the 1930’s and subsequent variants are easy to establish.  They circumvent many of the stringent requirements for successful establishment of the CBN two-queen system and involve simple piggybacking of established single queen hives. Nevertheless some care is required if the upper unit is not already well established, for example if it is to be used as a mating nucleus.

Ideally the new top brood chamber should at least have a laying queen and some brood at the outset.  If a queen cell is to be introduced or if a swarm is added,  the use of a double screen or separating nucleus board, to allow establishment of an upper colony before uniting, is warranted.  Hogg instances a case where a swarm placed above a top excluder resulted in the balling and supersedure of a well established lower queen 24 h later, a consequence of the unequal status of the two queens and brood nests.  Replacing the division with an excluder and using newspaper after a few weeks will ensure that the fledgling colony is successfully established.

However the complex arrangement of brood makes the traditional Farrar two-queen colony very difficult to operate as a production colony, a feature commonly cited its falling into disuse.  Nevertheless it has particular application in operating colony splits – on the one stand – and has great merit in accelerating development of small colonies.

The future of two-queen hives

Despite the adage of two-queen hives being too difficult to operate and too cumbersome to migrate, this review signals that double brood box two-queen consolidated brood nest (CBN) hives, once established, are both simple to operate and far more productive than equivalent two single-queen colonies.  Since two-queen hives only operate effectively over the main honey summer flow, all colonies in any apiary must be operated as single queen units for much of the year. The extra productivity comes at the expense of a much more intensely managed hive, a feature that legitimately draws disdain from even the most ardent beekeeper.

The unrealised potential of two-queen colonies to make efficient colony increase either by splitting powerful two-queen colonies at the end of the season or by operating single queens to develop top-of-colony nucs suggests that they can service more than the simple goals of increased honey production and pollination service.  Here a strong single queen hive can be employed:

Such fledgling colonies develop quickly and are better suited to making colony increase than operated as honey gatherers.

Secondly the notion of keeping a good one year old queen in a hive and introducing a new queen to form a two-queen hive has unstated merit. In a hobby operation, a good commercial queen may perform satisfactorily for as long as two years, though her performance will likely always decline dramatically after eighteen months. Hence, in an old queen-new-queen (double queen) hive operation, the simple practice of removing the dividing excluder towards the end of the honey flow will result in the younger queen nearly always superseding the lower older queen achieving automatic requeening. Since new queens are relatively easily established in nuclei and since finding and removing queens in populous colonies is a time consuming and sometimes frustrating process, I am attracted to this very elegant approach to requeening and extracting maximum value from purchased queens. Where two new queens are established to run a two-queen hive we have simply split the colony towards the end of the honey flow establishing two colonies for overwintering far stronger than similar single-queen colonies operated over summer.

There are other defining attributes of two-queen colonies that recommend their operation. It is not widely known that two-queen colonies have a low swarming propensity, a feature enhanced by using young commercial ‘low swarming’ stock.  As a strong advocate of regular requeening and good swarm control, I believe this to be a compelling reason to run two-queen hives despite a lingering reluctance to advocate anyone taking up their operation. Like any successful beekeeping operation, you need to know how to rectify problems when things go awry.

One enduring feature of published reports of two-queen hives is that unexpected systems of operating them continue to emerge. For example, Bill Hesbach and Ray Nabors have championed a now popular backyard version of the original Farrar setup. It employs a horizontal brood nest setup (Figure 8a). Like most successful two-queen systems it only employs standard gear.

Two independent single-queen colonies are established side-by-side and supers are placed over a centrally placed excluder (Figure 2a) using newspaper under the excluder to unite the colonies. The colonies share common storage space. A strip of linoleum or canvas placed over the bridging brood box hive walls and under the excluder helps avert risk either of the queens migrating from one nest to the other during super manipulation. Despite the fact that the colony appears to operate as two single (one-queen) hives, honey production is nevertheless more than twice that of two single-queen hives. This is likely a result of efficiency gains arising out of sharing of hive tasks and of improved nectar source surveillance associated with a much larger workforce.

This and other systems have been reviewed by Bernhard Heuvel. He advanced the notion of employing a large brood box divided by a vertical excluder, queens being established either side of the excluder to form a horizontal version of the CBN hive (Figure 2b). While neither brood nest benefits from the rising warmth of the other brood nest, the system confers the advantages of the Hogg CBN model in that all honey supers are operated above brood as in standard single-queen operation and that of sharing a large brood nest. 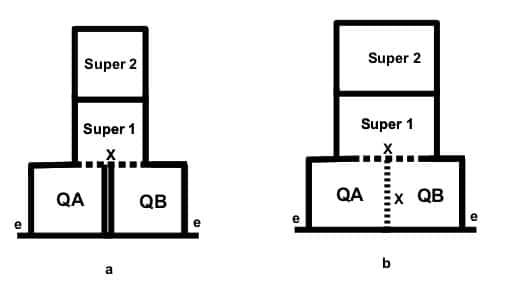 Figure 2 Horizontal two-queen systems. e = entrance; x= excluder. Bridged independent single-queen hives (a). In this system the honey supers are shared and the colony is notionally a two-queen hive; (b) CBN (consolidated brood nest system) after Heuvel.  In this system, a large, horizontally-elongated brood nest is formed with queens laying either side of a vertical excluder.

Until now, unaware of Heuvel’s model, we had been experimenting with a similar, but very large sixteen-frame lower double-brood box (see photo). Here a central slot can accommodate either a vertical division board (separating the whole setup into two single-queen colonies for overwintering) or a vertical queen excluder to convert the two single-queen hives to a two-queen colony. Such large supers, employing vertical excluders, were once widely employed by Australian commercial apiarists raising queens in a single strong hive: we are the beneficiary of such a colony. 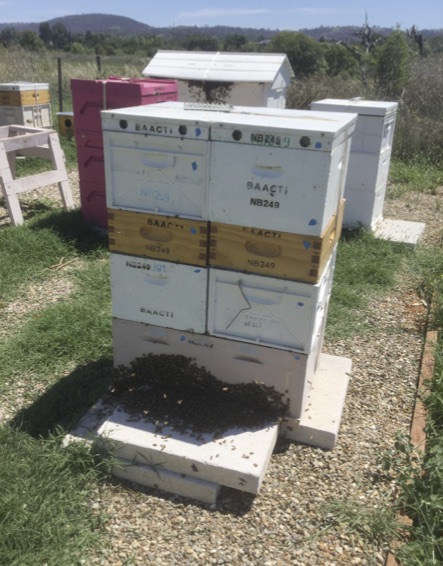 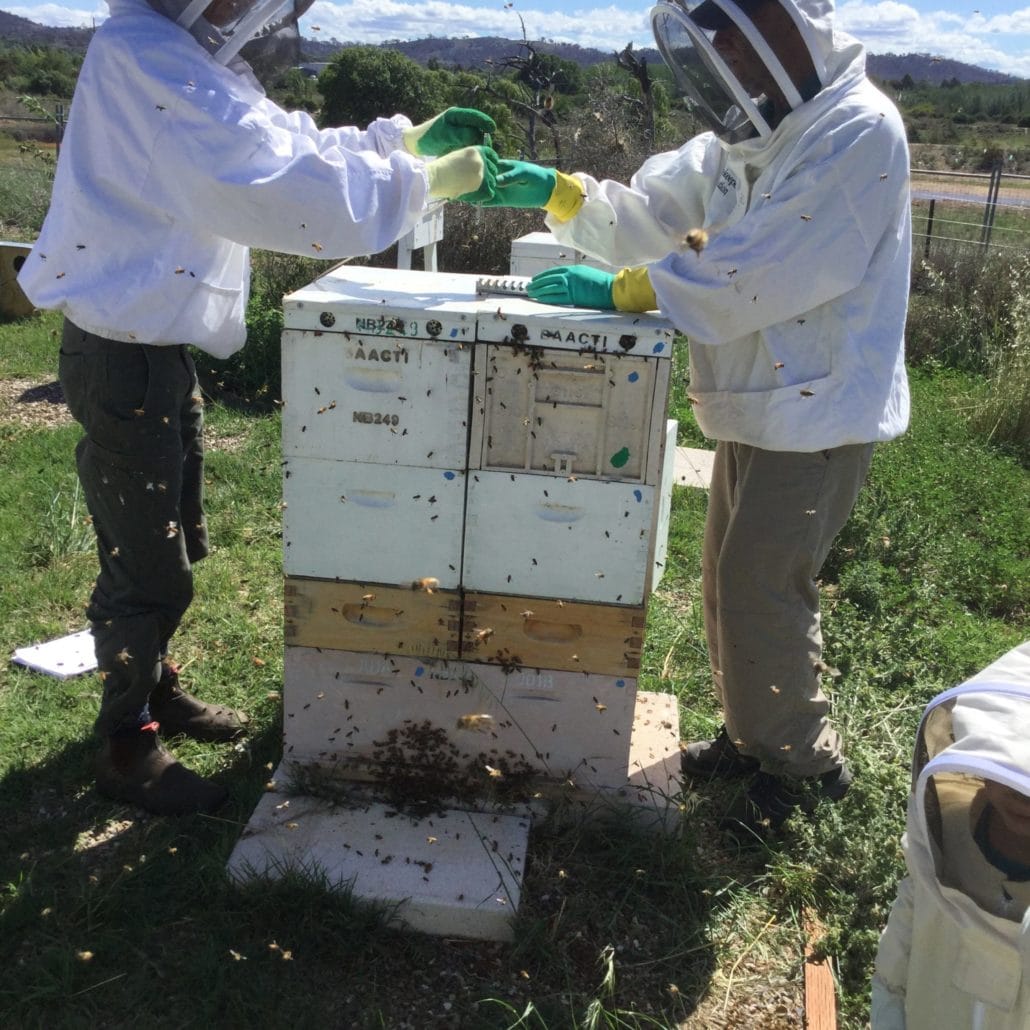 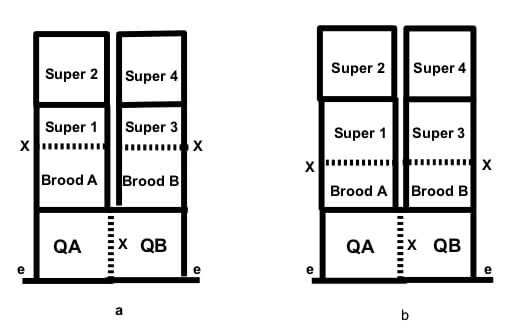 The resultant systems are structurally stable, supering can be adjusted to meet the strength of each unit and both brood nests are as accessible as they are in any single-queen operation. Its principle drawbacks lie in the initial setup of two queens (the dividing partitions must be snug to prevent queen movement between brood nests), the vertical queen excluder must have newspaper pasted to its face to facilitate uniting of the single queen hives while multiple entrances must be closed and opened to orient bees – to avoid queen supersedure – in the early setup phase of operation. It also employs an oversized non-standard bottom brood chamber and that, for all practical purposes, is only suited to permanent apiary placement.

Here is our horizontal two-queen hive in full cry in early January 2019.  Honey can be removed from both stacks and we’ve found it’s pretty easy to get down to inspect each part of the brood nest by working one stack at a time. 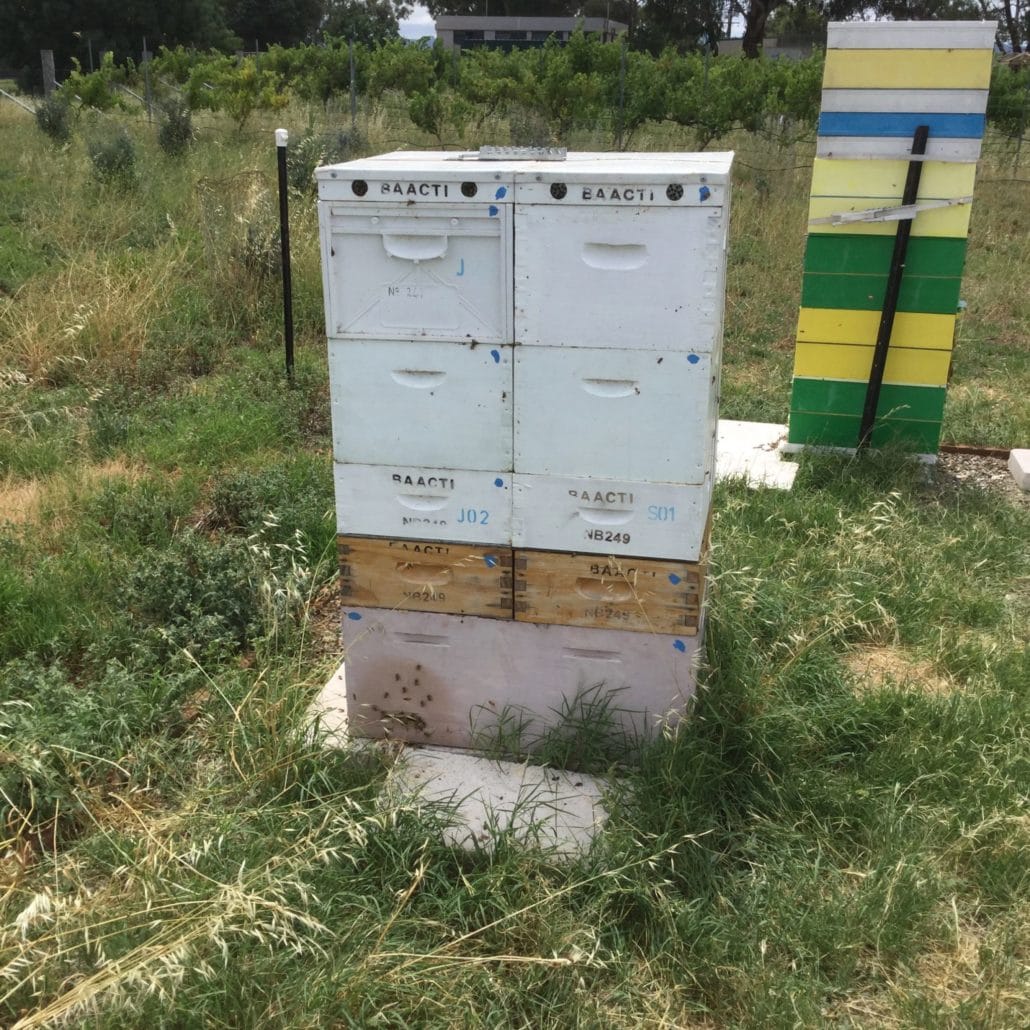 Plans are also afoot to employ two-queen colonies to produce shallow comb, cut comb and section comb honey, an initiative prompted and perfected by Hogg in his Juniper Hill Plan (employing CBN tower two-queen hives) to produce section comb honey. The system, based on the Eugene E. Killion’s method for producing section comb, largely overcomes the propensity of such colonies to swarm. As an extension to this principle, the club is contemplating experimenting with a two-queen flow hive colony with the objective of boosting production. Strategic tapping of flow frames during honey flows to produce selected floral varietal honey has already been exploited by club member, Greg Cassange.

There appears to be ample opportunity to exploit the potential of two-queen colonies. How practical and how labour intensive such schemes prove to be and the level of skill required to operate them successfully would appear to be very much in the lap of the gods.